Sundance Vacations, a leading discount and wholesale travel company has set the bar high with the completion of its first company wide quit smoking program, The Great Sundance Smoke Out.  This successful initiative that started on January 15, 2013, not only helped an astonishing 39% of its participants kick their smoking addiction and begin living healthier lives, but also focused on office teamwork, boosted company morale, and offered vacation and cash incentives to quitters and nonsmoking coaches that helped their colleagues quit smoking for good.

November 15, 2013, WILKES-BARRE, PA. – Sundance Vacations, a leading discount vacation and wholesale travel company based in Wilkes-Barre, Pennsylvania, announced the outstanding success of its first quit smoking campaign, The Great Sundance Smoke Out today.  The Great Sundance Smoke Out began on January 15, 2013, for all employees that wanted to quit smoking or help their fellow employees quit smoking.  The program was completed on October 1, 2013, with a remarkable 39% of participants successfully quitting the habit.  This program not only boosted morale among employees, it also helped employees tackle a difficult addiction and make positive and long lasting health changes.
The Great Sundance Smoke Out led by Sundance Vacations could not have come at a better time.  According to the American Cancer Society’s website, tobacco products cause 30% of all cancer related deaths and nearly 1 in 5 deaths in the U.S. each year.  Even exposure to secondhand smoke is deadly and accounts for over 45,000 deaths of nonsmokers every year (Tobacco-Related Cancers Fact Sheet).  And despite these staggering figures over 44 million Americans continue to smoke (Tobacco-Related Cancers Fact Sheet).
The Great Sundance Smoke Out was open to all smokers and nonsmokers within the Sundance family, either as an active quitter or as a nonsmoking coach.  At the onset of the campaign the smokers were able to choose 1-2 nonsmoking coaches to help support them through their quit smoking process.  Jessica Andes a successful quitter attributes her success to her friends that were her coaches at work.  “They were friends as well so they could be honest and be the tough friend to help me out,” said Andes.
Sundance Vacations also offered many incentives to employees and their coaches that participated in the program.  Twice throughout the program active participants and their coaches were entered into a $1,000 drawing that was split 70/30 between the smoker and the nonsmoking coach.  Upon completion of the program on October 1, 2013, the smokers that finished the program received a weeks paid vacation or the cash equivalent of a week of vacation.  Coaches that remained at the end of the program were entered into drawings for $2,000, $1,000, and $500 cash prizes.
The Great Sundance Smoke Out profoundly changed the lives of many Sundance employees and their families.  Stories from employees like Candy Bednar who smoked for over 30 years and quit with The Great Sundance Smoke Out are particularly poignant, “This was a big deal, not just to me, but to my family and friends. They were absolutely shocked…I smoked for 30 years!” Bednar said.
Debra Wegrzynowicz smoked 1.5 packs a day for over 10 years and attributed her success to the office camaraderie and her coach in The Great Sundance Smoke Out. “Coming to work and having the support of everyone was THE BEST!” Wegrzynowicz said.  And with the extra money she saved it helped her buy a new car.
Some people like Rachel Zambotti quit for their families.  “I don’t think I could have done it without the program,” Zambotti said.
Nick Gale, from Sundance Vacation’s Tamaqua Office who was dubbed an “awesome smoking coach” by many, helped coach Quitter Monica Kotzmoyer to non-smoking success. Nick helped out and supported many more quitters than even his own, and was lucky enough to win the big coach prize drawing of $2000! He loved “being able to encourage someone to help change their lives!” and felt that it was “pretty amazing that a company would do something like this. Not many companies would give away vacations to help their employees quit smoking.”
These stories are moving and motivating people throughout the entire company. In fact, people that weren’t originally involved in the Great Sundance Smoke out, like Mary Jo Penberth, quit smoking because others in her department were so successful. The Great Sundance Smoke Out isn’t the only good that Sundance Vacations is doing for its employees.  Last year the company embarked on its own Biggest Loser type program that resulted in employees losing a combined total of over 1650 pounds! As Sundance Vacations very own Ed Coppinger said, “That’s the equivalent of a Beluga Whale, a Plains Bison, or a Smart Car!”
About Sundance Vacations:
Not only does Sundance Vacations offer life changing programs for its employees, it also offers vacation getaway packages for just about everyone.  Sundance stays true to its Mission Statement: “We share the common goal of enriching the lives of our customers and each other by helping people experience quality vacations through caring and professional service.” Whether you are dreaming of the beach, yearning to get away deep in the mountains, or looking for adventure with Mickey in Disney World, Sundance has a package for you. 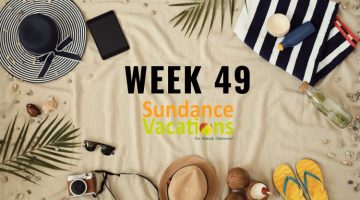 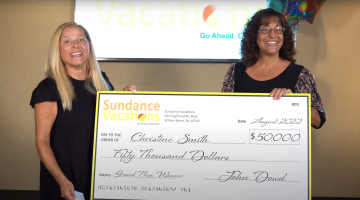 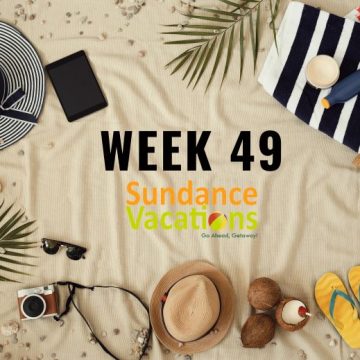