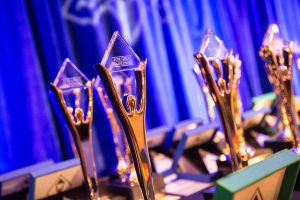 Sundance Vacations was presented with a 2016 Stevie Award for Great Employers.

NEW YORK CITY, N.Y. — Sundance Vacations was honored with a 2016 Silver Stevie Award for Employer of the Year in the Hospitality and Leisure category during the first annual Stevie Awards for Great Employers that were presented on Friday, September 30.

Now, with 25 years of business experience in the travel industry, Sundance Vacations has again proven itself a viable mainstay in the spotlight by attaining this prestigious award.  The announcement comes on the heels of the company receiving a Pennsylvania State Senate Citation for achieving the 25 year milestone.

Headquartered in Wilkes-Barre, Pennsylvania, Sundance Vacations will now be celebrating its 25 year anniversary with a, rather appropriate, silver award in their trophy case.

“It is an amazing opportunity to receive this award as it is also our silver anniversary of 25 years in business,” said Candy Bednar, Sundance Vacations Vice President Business Development.  “Personally, it has been rewarding to have been with a company with such great employees.  [Those] employees are what make the company great.”

The Stevie Awards for Great Employers recognize the world’s best employers and the human resources professionals, teams, achievements and HR-related products and suppliers who help to create and drive great places to work.

Nicknamed the Stevies for the Greek word meaning “crowned,” the awards were presented to winners at a gala ceremony at the Marriott Marquis Hotel in New York City.

More than 50 professionals worldwide participated in the judging process to select this year’s Stevie Award winners.

“The judges were extremely impressed with the quality of entries we received in the first Stevie Award for Great Employers. The dedication these Stevie-winning organizations have to making great workplaces for employees was evident in every nomination,” said Michael Gallagher, president and founder of the Stevie Awards.

Earlier in the year it was announced that Sundance Vacations had qualified as a finalist for the Awards for Great Employers thanks to votes from the public as well as a various judges appointed by the Stevie Awards committee.